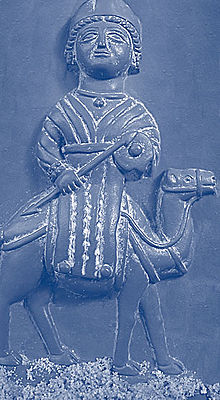 Allāt on a camel. Bas-relief from Taif, Saudi Arabia, around 100 AD

The shrine and temple dedicated to al-Lat in Taif was demolished on the orders of Muhammad, during the Expedition of Abu Sufyan ibn Harb, in the same year as the Battle of Tabuk (which occurred in October 630 AD). The destruction of the idol was a demand by Muhammad before he would allow any reconciliation to take place with the tribes of Taif, who were under his siege. Whether al-Lat means “the Goddess” is highly disputed. Goddess in Arabic is ilāhah (إلاهة, meaning “goddess”), and with the article the goddess in Arabic would be al-ʾilāhah. 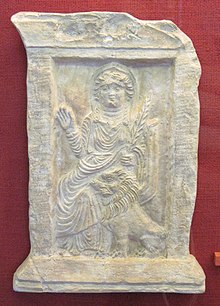 Bas-relief of Allāt from Palmyra, shown with a palm branch and a lion

Especially in older sources, Allat is an alternative name of the Mesopotamian goddess of the underworld, now usually known as Ereshkigal. She was reportedly also venerated in Carthage under the name Allatu.

The Nabataeans of Petra and the people of Hatra also worshipped her, equating her with the Greek Athena and Tyche and the Roman Minerva. She is frequently called “the Great Goddess” in Greek in multi-lingual inscriptions. According to Wellhausen, the Nabataeans believed al-Lāt was the mother of Hubal (and hence the mother-in-law of Manāt).

The Greek historian Herodotus, writing in the 5th century BC, considered her the equivalent of Aphrodite:

The Assyrians call Aphrodite Mylitta, the Arabians Alilat [Greek spelling: Ἀλιλάτ], and the Persians Mithra. In addition that deity is associated with the Indian deity Mitra.

This passage is linguistically significant as the first clear attestation of an Arabic word, with the diagnostically Arabic article al-. The Persian and Indian deities were developed from the Proto-Indo-Iranian deity known as Mitra. According to Herodotus, the ancient Arabians believed in only two gods:

They believe in no other gods except Dionysus and the Heavenly Aphrodite; and they say that they wear their hair as Dionysus does his, cutting it round the head and shaving the temples. They call Dionysus, Oratalt; and Aphrodite, Alilat. 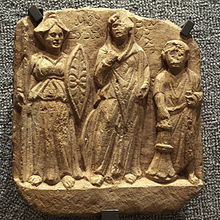 Bas-relief: Nemesis, Allāt and the dedicator. Courtesy of the Museum of Fine Arts of Lyon

In the Qur’an, she is mentioned along with al-‘Uzzá and Manāt in Sura 53:19–23. The tribe of ʿād of Iram of the Pillars is also mentioned in Sura 89:5–8, and archaeological evidence from Iram shows copious inscriptions devoted to her for the protection of a tribe by that name.

Al-lāt is also explicitly attested from early Islamic records discussing the pre-Islamic period. According to the Book of Idols (Kitāb al-ʾAṣnām) by Hishām ibn al-Kalbi, the pre-Islamic Arabs believed Al-lāt resided in the Kaʿbah and also had an idol inside the sanctuary:

Her custody was in the hands of the Banū Attāb ibn Mālik of the Thaqīf, who had built an edifice over her. The Quraysh, as well as all the Arabs, venerated al-Lāt. They also used to name their children after her, calling them Zayd al-Lāt and Taym al-Lāt. […] Al-Lāt continued to be venerated until the Thaqīf embraced Islam, when Muhammad dispatched al-Mughīrah ibn-Shu‘bah, who destroyed her and burnt her temple to the ground.ion of statues and shrine

The shrine and temple dedicated to al-Lat in Taif, was demolished by Abu Sufyan ibn Harb, on the orders of Muhammad, during the Expedition of Abu Sufyan ibn Harb, this occurred in the same year as the Battle of Tabuk (which occurred in October 630 AD). Muhammad sent Abu Sufyan with a group of armed men in order to destroy the Idol al-Lat (also referred to as al-Tagiyyah) that was worshipped by the citizens of Taif. The destruction of the idol was a demand by Muhammad before any reconciliation could begin with the citizens of Taif who were under siege and suffering from a blockade by the Banu Hawazin, led by Malik, a convert to Islam who promised to continue the war against the city which was started by Muhammad in the Siege of Taif in a pre-emptive strike.